Real Info on all the necessary baby products

If you want to put an extra layer of protection on your infant, then you don’t want to miss the Snuza Hero Baby Movement Monitor. It’s designed to clip to the baby’s diaper so that you can monitor your baby’s breathing and movement in a portable and compact way.

The previous name is the Halo and it was changed into the Hero in 2012, but they both refer to the same Snuza baby monitor.

How Does It Work?

The Snuza Hero is just a single unit clipping onto the baby diaper, which is different from traditional baby monitors from our site. If the baby is fine, it will generate a soft tick to indicate such.

It will make a vibration to arouse the baby if it detects no movement or breathing for 15 seconds.

And if it still doesn’t detect anything with five seconds of the vibration, it will alert you with an alarm.

Benefits of the Snuza Hero

Let’s Take a Look At The Details

The Snuza Hero rarely makes false alarms under ideal circumstances that mean predictable and good fit baby movements. According to customers’ feedback, most of the false alarms happened when it fell off the diaper.

Some said that together with a sound monitor, they could rest assured and sleep well at night. Besides, the alarm is clear and loud enough to wake up the parents next door.

It is interference-free since there is no radio broadcasting. It is designed to placed inside baby’ clothing to eliminate interference from ambient movements, fans and crib mobiles to which most of the movement monitors are not insusceptible.

3) It is so portable

The Snuza Hero can also be attached to the baby’s tummy or on their side. Most parents have no problem in positioning the Snuza Hero, though those whose infants are premature and/or small reported some minor fit issues. And some parents said that they had to adjust the diaper to make sure the monitor stayed in place.

Well, parents whose babies are tummy sleepers will have to choose side positioning which might eliminate the monitor’s sensitivity to subtle, deep-sleep breathing.

It can be particularly tricky to keep the Snuza Hero in place with the wiggly babies.

As long as you place the Hero in the diaper properly before the baby gets asleep, it will work great.

4) It is more versatile

You can use the Snuza Hero Baby Movement Monitor anywhere your baby sleeps. Compare that to most baby movement monitors that use sensor pads that are placed under a bassinet mattress or crib.

With the Snuza Hero, it is easy for parents who want to monitor their baby even while sleeping on trips.

Obviously, you cannot use mattress-based motion sensors to monitor twins or multiples sharing a sleep space. However, the Snuza Hero provides separated monitoring of the baby, which makes multiple Snuza Hero units a convenient way to monitor multiple babies in the same space.

What Did Other Parents Say About the Snuza Hero?

“The Snuza Hero saved the life of my little son.” – Pen

“It makes no false alarms.” – Jeremy

“It brings me peace of mind.” – Christine Halliday

Verdict on the Snuza Hero

Though a baby movement monitor is not a must-have item to ensure your baby’s safety. While there are no studies showing that it can 100% prevent SIDS, it does bring a peace of mind to those whose infants do not need hospital grade monitoring.

Most importantly, you can take the right steps in the first place once something is going wrong with your sweet child.

With the Snuza Hero, you do not need to check on your baby too frequently to see if he or she is still breathing, and there are no cords or wires which could bring potential injury to your baby.

It has received a good rating of around 4.5 stars on Amazon. Customers are fond of its lightweight, portable design and reliable features.

Some parents even told that this little gadget saved their son’s life! 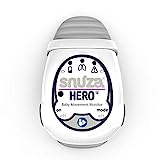 Hello! Glad you are here. I'm Janelle and a mother to 4 beautiful kids ranging from age 2 to 10. Motherhood is hard enough as it is...so I love sharing tips, hints and secret things to help out everyone!